In the Valley of the Kings, in that remote region far away from the civilization where the pharaohs find their last resting place, a strange incident is reported to have happened many years ago. It is no longer possible to establish if that occurrence really took place and how much of that report is true; and yet, until today people keep finding beautiful faience pearls which the storm scattered across the Great Desert that fateful day. It is believed that one night a gang of daring individuals, whose trade was most obviously that of grave robbers, had discovered the treasure of Tutankhamun, but were punished by the Tutankhamun’s curse when trying to relieve the pharaoh of his beautiful gems. It is said that there was one of the gang who was extremely in luck to have survived that horrible night. And yet, the pharaoh’s curse had its effect outside the crypt, too, because when that lucky individual was loading the donkey with the precious cargo, an uncanny sandstorm broke out and scattered all the beautiful pearls across the desert… 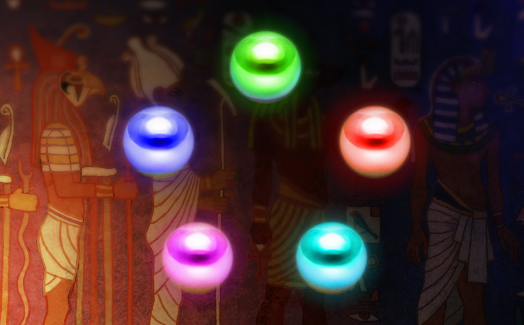 What is it about?

During the event we’ll have five new resources: the blue, green, red, cyan and pink faience pearls. We will enable a new faience pearl inventory to store and count your pearls, accessible any time from the following button on the main overview:

These pearls will be found in nomad camps. Every nomad camp will have a varying amount between one and three pearls, no matter the location or the level. Every pearl is not equal, however, some are easier to find than others, the blue pearl being the most common and the pink one the rarest. If you plunder a nomad camp successfully, and as long as another player didn’t find them before you, you’ll see your bounty in your battle report in the following manner:

And they will of course join your inventory immediately. Keep in mind the following:

Finally, and only during the event, Neith Priestesses, High Priests, and the Edfu and Valley festivals will be available in exchange for different amounts of pearls:

Thanks to their supernatural clairvoyant abilities, High Priests will enable spying troop activity of your opponents’ cities. Once you have recruited a high priest, select him in the unit orders window, choose the mission “Spy”, and send him out. As with ordinary spying missions, when the high priest arrives his destination you will get a report, only this time it will encompass the city incoming and outgoing troop movements: 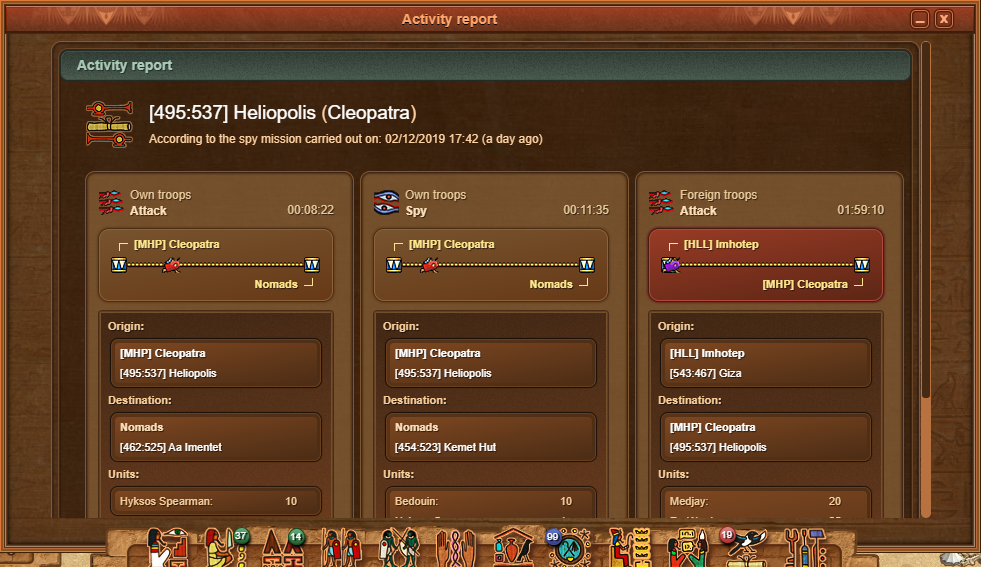 Important to keep in mind the following:

Example: suppose that you have two troops on the move outgoing from your main city, troop A and troop B. Troop A has 2 Hyksos and 2 Khopesh, troop B has 3 Ra Warriors and 2 High Priests. If an opponent sends one high priest to your main city to spy your activity, on the report back troop A will be fully visible, but troop B will be hidden. In this scenario, only if the opponent sent 3 high priests would he see the details of the troop B.

In a typical battle, supporting units such as Wabaus, Seshs, traders or merchants are protected by fighting units and are not taken down until the rest of the units are defeated. The special unit Neith Priestess, however, has the unique ability to target supporting units before other fighting units are down, thus sending these priestesses along with fighting units to battle can suprise the opponent and change the outcome, sometimes substantially. Recruit this unit to obtain an advantage in battle, but be careful, because this unit switches sides if you lose a battle with them in your ranks as a defender.

Once active, the Edfu Festival will allow your troop to move without an expense in wheat, effectively driving your wheat cost to zero, regardless the destination or the size of your troop. This can be specially handy to move large troops over long distances where wheat costs are usually far too prohibitive to render it practical. The effect applies only while the feast is active (15 minutes without Scaerabeus items), and it’s applied automatically upon sending a troop via the unit orders window as usual:

Please note that in order to take advantage of the effect, only the start time of the order matters. That is to say, it’s not relevant if the travel time is longer than the entire festival effects, as long as you send the troop while the festival is active.

Once this festival is active and for a limited time (15 minutes without Scaerabeus items), the “last time online” information of every player will become available. In other words, for the duration of the festival you’ll be able to know whether a player is online and active or not, and when was the last time they were online. This info will be visible in each respective player profile. Without the festival you would normally see this: 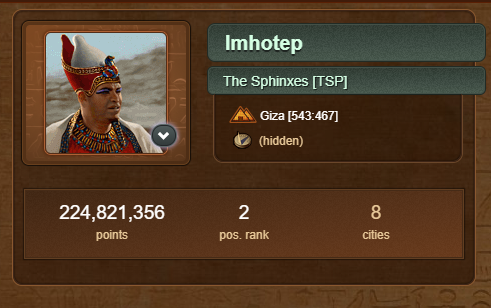 Whereas with the valley festival, the part that says “(hidden)” is uncovered: 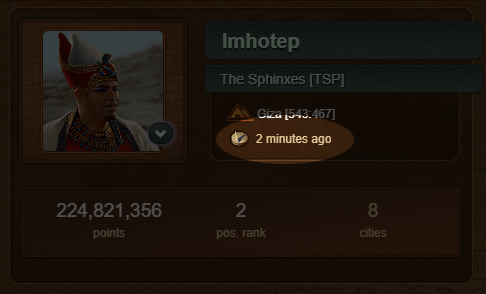 We use cookies on our website to give you the most relevant experience by remembering your preferences and repeat visits. By clicking “Accept”, you consent to the use of ALL the cookies.
Do not sell my personal information.
Cookie SettingsAccept All
Manage consent

This website uses cookies to improve your experience while you navigate through the website. Out of these, the cookies that are categorized as necessary are stored on your browser as they are essential for the working of basic functionalities of the website. We also use third-party cookies that help us analyze and understand how you use this website. These cookies will be stored in your browser only with your consent. You also have the option to opt-out of these cookies. But opting out of some of these cookies may affect your browsing experience.
Necessary Always Enabled
Necessary cookies are absolutely essential for the website to function properly. These cookies ensure basic functionalities and security features of the website, anonymously.
Functional
Functional cookies help to perform certain functionalities like sharing the content of the website on social media platforms, collect feedbacks, and other third-party features.
Performance
Performance cookies are used to understand and analyze the key performance indexes of the website which helps in delivering a better user experience for the visitors.
Analytics
Analytical cookies are used to understand how visitors interact with the website. These cookies help provide information on metrics the number of visitors, bounce rate, traffic source, etc.
Advertisement
Advertisement cookies are used to provide visitors with relevant ads and marketing campaigns. These cookies track visitors across websites and collect information to provide customized ads.
Others
Other uncategorized cookies are those that are being analyzed and have not been classified into a category as yet.
SAVE & ACCEPT
It looks like you are using an ad-blocker! Ads help us pay for the server. Please disable ad blocker and refresh page.